A popular question that even doctors don’t give an exact answer to. Some are definitely against it, others say that you need to take into account what alcohol you drink and how much. In fact, it all depends on the active substance of the drug. Some types of antibiotics with alcohol are not friends at all, some interact quite normally. Of course, you should not mix alcohol with pills after reading this article. It will help you not to panic, but calmly sort out the issue if for some reason you still drank.

Compatibility of antibiotics and alcohol. History.

The question of compatibility of antibiotics and alcohol arose in the 60s of the last century, when the United States began to actively prescribe a new broad-spectrum antibiotic metronidazole (flagil). It was noticed that patients who simultaneously took alcohol with metronidazole showed very unpleasant symptoms: nausea, vomiting, diarrhea, increased sweating, redness of the skin, rapid heartbeat, headache, drowsiness, dizziness, confusion, and many others. 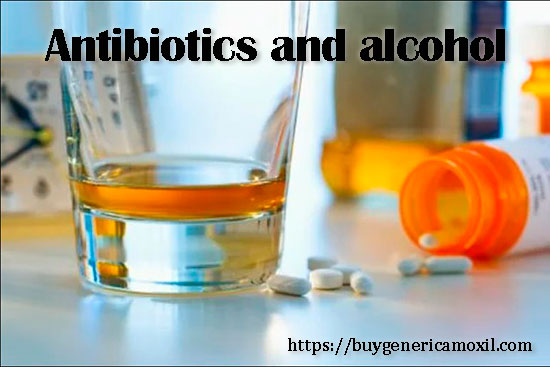 It is interesting that this clinical picture was similar to another one that manifested itself in the 1880s in people engaged in the production of rubber, or rather its vulcanization. Then, to speed up this process, the chemical disulfiram was used. And workers who relaxed after a shift with alcohol (having inhaled disulfiram vapors during the day), massively failed, demonstrating the symptoms described above. In the 1940s, this was remembered, and doctors even had the idea to use disulfiram in the treatment of alcoholism. Patients who used this substance with alcohol developed such an intolerance (nausea, vomiting, heart failure, etc.) that many forgot about alcohol forever. By the way, today disulfiram is patented as Antabuse and is quite sold.

Let’s go back to the antibiotic metronidazole. Based on the fact that its use with alcohol showed very unpleasant symptoms, the antibiotic was considered as a means to treat alcoholism, but it did not go further than pilot studies. Today, metronidazole is used only for its intended purpose — for the treatment of gastrointestinal infections, including diverticulitis (inflammatory bowel disease), as well as for the treatment of gynecological diseases and sexually transmitted diseases. Alcohol intake during the course of metronidazole is strictly not recommended.

What antibiotics are definitely not allowed to take alcohol with

With metronidazole. The website of the national health service of great Britain (National Health Service, NHS) reports that the manufacturers of metronidazole advise to avoid alcohol during the antibiotic and for the next 48 hours (preferably 72) after the course is completed. This is due to the fact that metronidazole is excreted from the body for about 2 days. At this time, it is wise to avoid using cough and cold remedies containing alcohol, as well as mouthwash.

With tinidazole. An antibiotic that is sometimes used to treat the same infections as metronidazole, as well as to eliminate the pathogens Helicobacter pylori (H. pylori) in diseases of the stomach (ulcers, gastritis).

Another class of broad — spectrum antibiotics-cephalosporins-does not interact well with alcohol. Although there are a lot of drugs with this active substance, and only 78 cases of negative reactions were reported in patients (with intravenous infusion), nevertheless, when taking antibiotics of this class (cefotetan, cefotan), it is better to refrain from drinking alcohol.

The antibiotic linezolid can sometimes interact with distilled (fermented) alcoholic beverages, such as wine, beer, sherry and lager, and cause an increase in blood pressure.

What antibiotics are safe to take alcohol with

Most antibiotics do not interact with alcohol. The instructions for the five most commonly prescribed drugs (in the United States, for example) — amoxicillin/amoxil, azithromycin/zithromax, amoxicillin-clavulanate/Augmentin, cephalexin/keflex, and ciprofloxacin/cipro — do not prescribe alcohol-related contraindications. Similarly, they are not accompanied by comments on the interaction with antibiotics and instructions for anti-cold medications and cough medications that contain alcohol.

Serious studies that would confirm the danger of taking antibiotics and alcohol together have not been conducted. There are studies (conducted only on rats) that have shown that the effectiveness of azithromycin (a broad-spectrum antibiotic that treats pneumonia, bronchitis, ear diseases, sinus and venereal infections) when interacting with alcohol does not decrease. However, you need to understand that exposure to alcohol and the active substance of the antibiotic can cause temporary damage to the liver and generally create an undesirable load on all body systems. In rare cases, azithromycin itself, being a strong enough drug, can cause liver damage and serious side effects. So is it worth mixing?

So, it is believed that alcohol usually does not affect the effectiveness of antibiotics. However, their combination can cause unpleasant side effects. There is also a possibility of reducing the therapeutic effect of the antibiotic when its concentration in the blood changes due to the influence of alcohol. In the long term, we can talk about the development of resistance to antibiotic therapy.

Whether or not to drink alcohol at the same time as antibiotics is up to you. If for some reason you can’t do without it, consult your doctor or check the compatibility of the drug with alcohol on the website Drugs.com.

It is reasonable to wait a week or two — finish the course of the drug and wait until it is eliminated from the body. Moreover, alcohol can interact with other medications that you take, and irritate the stomach lining, which is already inflamed. The US Food and Drug Administration (FDA) recommends discussing these things with your doctor. There is also a special guide on the compatibility of medicines, foods and beverages (including alcohol), specially issued by the FDA for patients. If there are doubts, but you can’t consult a doctor, you can focus on him.

Antibiotics and alcohol. Can they be combined?