At the beginning of the XIX century, there were already some ideas about the contagiousness of purulent diseases, but they were considered to be caused by gases formed during rotting and entering the body from the air. Their nature was not fully understood, and hygienic measures of that time were mainly aimed at combating the sources of rotting. The history of antimicrobials had not yet begun at that time. 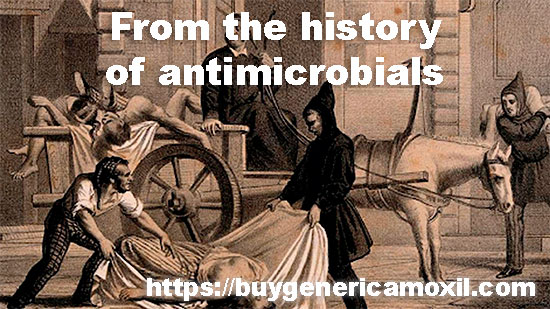 Nevertheless, doctors paid attention to the connection of surgical intervention with the development of infectious complications. The English surgeon Lister noted:

Nothing struck so much in the old days during surgical operations as the difference in the course of wounds, depending on whether the skin was damaged or not… As soon as the broken bones came into contact with the external environment through the medium of an open wound, then even in cases apparently unimportant… the fracture took on a dangerous character.

The beginning of the history of antimicrobials agents

In the capital’s hospitals, things were no better. According to contemporaries, in Vienna of the XIX century, the epidemic of postoperative fever takes more than half of all operated to the grave; in the Munich hospital, “Antonov fire … reached such a size that up to 80 percent of patients fell ill with it,” surgeons of that time noted bitterly.

Doctors could only state the terrible scale of the disaster. The outstanding Scottish surgeon James Young Simpson spoke about this:

Despite the lack of sufficient knowledge in the field of microbiology at that time, scientists have established a link between the level of hand hygiene and septic consequences in patients. So, in 1843, Oliver Wendell Holmes, professor of anatomy and physiology at Harvard University, published a study comparing the habit of obstetricians to wash their hands and the development of sepsis in maternity patients.

The history of antimicrobials agents begins!

Doctors continued to think about how to increase the survival rate of surgical patients. Having no true knowledge of the nature of infections, the English surgeon Joseph Lister “Having learned that carbolic acid has a remarkable property of eliminating a bad smell, decided to try it”. In 1864, on his instructions, the walls and household items in the surgical department were treated with phenol. The air in the department has slightly refreshed, the mortality rate has decreased somewhat.

In 1865, Louis Pasteur published the results of his research, which showed that rotting is caused by living microorganisms. He also concluded that infectious diseases arise as a result of infection with microbes from the external environment.

In this regard , Lister wrote: “We just need to find a substance that will kill pathogenic microbes without harming a person.” Carbolic acid was used as such a substance by Lister. As a result, according to Lister, “the wound healed just like a simple fracture, and besides, the skin remained intact,” and “my chambers, reputed to be the most dangerous in the whole kingdom, became the best in the whole world.” We can say that this is how the history of antimicrobials began, then let’s talk about the development of antibiotics.

Stages of development of antimicrobial agents

The next stage in the development of antimicrobial teaching is associated with the First and Second World Wars. This period differed from the previous ones with unprecedented large-scale and bloody battles. New weapons, new military equipment designed to destroy people, new wounds – huge, contaminated, not treatable.

At this time, the problem of insufficient effectiveness of antiseptics became obvious. The solutions available to the doctors no longer helped.

Thanks to the success of chemistry, new means for aseptic treatment of instruments, surfaces and antiseptic treatment of wounds and skin were found: chlorine-, oxygen-, aldehyde-containing, iodine compounds, chlorhexidine, ethylene oxide and a number of other substances.

And of course, the discovery of antimicrobial chemotherapeutic agents – those that we now call antibiotics – was a huge success in the 30-40 years of the XX century. They are intended for oral administration, but their effect on asepsis and antiseptics is enormous.

But not everything turned out to be so simple and the complete victory of medicine over infections did not come. Why? Because theory has diverged from practice.

By the time penicillin was discovered, science already knew a considerable number of pathogenic and opportunistic microorganisms. Since it turned out that some of them are resistant to penicillin, scientists have begun to develop other groups of antibiotics – tetracyclines, cephalosporins, macrolides, aminoglycosides.

But under the influence of antibiotics, the bacteria began to change. New colonies developed mechanisms of protection against the effects of drugs. Treatment, which had recently been successful, was becoming ineffective. Scientists were inventing a new drug, and bacteria were inventing a new weapon.

The intention of people to defeat all microbes with the help of antibiotics, for example, amoxil, firstly, is impossible, and secondly, does not lead to a positive result: nature still does not give up its positions, and the microcosm around us successfully resists.

Therefore, some of the approaches to asepsis and antiseptics have been revised.

People have finally recognized that it is not microbes that live among people, but on the contrary, people live in an environment of microbes. Of the 80 trillion cells in the human body, less than 50% are the cells of his body. The rest are intestinal microbes, skin, other organs and tissues. And it’s hard to imagine how many of them there are on the planet, but according to some estimates, their number is 5 octillion — this is a number with 27 zeros!

First, people have stopped trying to destroy all the microbes around them.

To care for wounds, treat infectious diseases and even disinfect surfaces, bacteriophages (viruses that devour bacteria), beneficial probiotic bacteria (for example, lactobacilli, bifidobacteria – everyone has heard of them), prebiotics (special substances that stimulate the growth of beneficial bacteria) are increasingly used.

Secondly, in cases where surgical intervention is needed, minimally invasive methods are used.
If there used to be a saying “a big surgeon is a big incision”, then in the XX and XXI centuries the incisions simply began to decrease in size, and then, with the advent of laparoscopy, they turned into 3-4 barely noticeable punctures (recently it may be 1 small hole at all). That is why most of the planned operations are now performed by laparoscopic methods.

Thirdly, our knowledge in the field of microbiology and infectious diseases has expanded. Scientists have encountered the resistance of microbes to antimicrobial agents, discovered prions – the smallest pathogens known to us, protein molecules capable of causing fatal brain diseases in humans, extremely resistant to the action of disinfectants.

And the fourth. The search for new antimicrobial agents and disinfection and sterilization technologies is still underway. The history of antimicrobials changes over time- safe for humans, sparing tools, but maximally effective against infectious agents. This is especially important, given the emergence in recent decades of high-tech medical equipment for diagnostics and surgical interventions. It is very complex, has many channels, optical and electronic modules. It is difficult to disinfect it – special disinfectants and equipment are needed, for example, low-temperature sterilizers that use hydrogen peroxide plasma.

Science does not stand still, and our knowledge of the microcosm is constantly expanding. Of course, the future holds many more discoveries in the field of asepsis and antiseptics.

From the history of antimicrobials