Antibiotics in ancient times: According to historical sources, many millennia ago, our ancestors, faced with diseases caused by microorganisms, fought them with available means. Over time, humanity began to understand why certain drugs used since ancient times are able to affect certain diseases, and learned to invent new drugs. Now the amount of funds used to combat pathogenic microorganisms has reached a particularly large scale, compared even with the recent past. Let’s look at how people have used antibiotics throughout their history, sometimes without knowing it, and how, as knowledge accumulates, they are using them now.

Bacteria appeared on our planet, according to various estimates, about 3.5-4 billion years ago, long before the eukaryotes. Bacteria, like all living things, interacted with each other, competed and fought. We can’t say for sure if they were already using antibiotics to beat other prokaryotes in the battle for better environments or nutrients. But there is evidence of genes encoding resistance to beta-lactams, tetracyclines, and glycopeptide antibiotics in the DNA of bacteria that were found in the ancient permafrost 30,000 years ago.

A little less than a hundred years have passed since the official discovery of antibiotics, but the problem of creating new antimicrobial drugs and using already known ones under the condition of rapidly emerging resistance to them has been worrying humanity for the last fifty years. It is not without reason that in his Nobel speech, the discoverer of penicillin, Alexander Fleming, warned that the use of antibiotics should be taken seriously.

Just as the time of the discovery of antibiotics is delayed by several billion years from their initial appearance in bacteria, so the history of human use of antibiotics began long before their official discovery. And we are not talking about the predecessors of Alexander Fleming, who lived in the 19th century, but about very distant times. 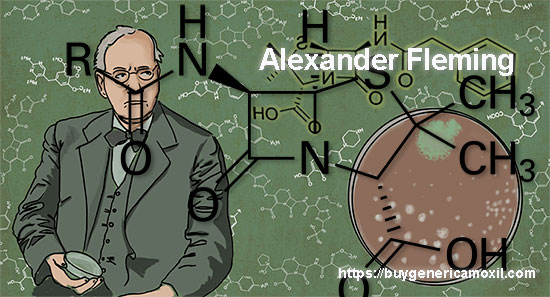 Even in ancient Egypt, moldy bread was used to disinfect cuts. Bread with mold mushrooms was used for medicinal purposes in other countries and, apparently, in many ancient civilizations in general. For example, in Ancient Serbia, China and India, it was applied to wounds to prevent the development of infections. Apparently, the inhabitants of these countries independently came to the conclusion about the healing properties of mold and used it to treat wounds and inflammatory processes on the skin. The ancient Egyptians applied crusts of moldy wheat bread to the pustules on the scalp and believed that using these remedies would help propitiate the spirits or gods responsible for disease and suffering.

The inhabitants of ancient Egypt used not only bread with mold to treat wounds, but also self-made ointments. There is information that around 1550 BC they prepared a mixture of lard and honey, which was applied to wounds and bandaged with a special cloth. Such ointments had some antibacterial effect, including due to the hydrogen peroxide contained in honey. The Egyptians were not pioneers in the use of honey — the first mention of its healing properties is considered an entry on a Sumerian tablet dating from 2100-2000. BC, which says that you can use honey as a medicine and ointment. And Aristotle also noted that honey is good for healing wounds.

In the process of studying the bones of mummies of ancient Nubians who lived in the territory of modern Sudan, scientists found a large concentration of tetracycline in them. The mummies were about 2,500 years old, and it is likely that the high concentrations of the antibiotic in the bones could not have appeared by chance. Even in the remains of a four-year-old child, its number was very high. Scientists suggest that these Nubians have been consuming tetracycline for a long time. Most likely, its source was the bacteria Streptomyces or other actinomycetes contained in the grains of plants from which the ancient Nubians made beer.

In the fight against infections, people around the world have also used plants. It is difficult to understand exactly when some of them began to be used, due to the lack of written or other material evidence. Some plants were used because people learned about their anti-inflammatory properties by trial and error. Other plants were used in cooking, and together with the taste properties, they also had an antimicrobial effect.

This is the case with onions and garlic. These plants have long been used in cooking and medicine. The antimicrobial properties of garlic were known in China and India. And not so long ago, scientists found out that traditional medicine did not use garlic for nothing — its extracts inhibit Bacillus subtilis, Escherichia coli and Klebsiella pneumoniae.

In Korea, since ancient times, Chinese Schisandra chinensis has been used to treat gastrointestinal infections caused by salmonella. Even today, after checking the effect of its extract on this bacterium, it turned out that lemongrass really has an antibacterial effect. Or, for example, spices that are widely used around the world were tested for the presence of antibacterial substances. It turned out that oregano, cloves, rosemary, celery and sage inhibit pathogens such as Staphylococcus aureus, Pseudomonas fluorescens and Listeria innocua. On the territory of Eurasia, people often harvested berries and, of course, used them, including in treatment. Scientific studies have confirmed that some of the berries have anti-microbial activity. Phenols, particularly ellagic contained in the fruit of the cloudberry and raspberry, inhibit the growth of intestinal pathogens.

The use of antibiotics in the 20th century

The 1940s and 1960s of the XX century are called the “golden era” of the discovery of antibiotics. At that time, in order to obtain a new substance with antibiotic activity, it was possible to take a sample of soil, isolate microorganisms from it and study them. At the same research facility, it was possible to test newly synthesized or isolated antibiotics from other microorganisms. In the 1980s, combinatorial chemistry began to develop, and in the 1990s, its methods were used by pharmaceutical companies, including for the search for new antibiotics.

Officially, the “golden era of antibiotics” begins with the discovery of penicillin. This happened in 1928, and the discoverer is officially considered the British bacteriologist Alexander Fleming. By the way, the very Petri dish, thanks to which he made the discovery and later received the Nobel Prize, along with the same mold, was sold at auction for 14 thousand dollars not so long ago.

At first, Fleming’s discovery was not used to treat patients and continued its life exclusively behind the doors of the laboratory. In addition, as Fleming’s contemporaries reported, he was not a good speaker and could not convince the public of the usefulness and importance of penicillin. The second birth of this antibiotic can be called its rediscovery by scientists from the UK Ernst Cheyne and Howard Florey in 1940-1941.

The use of antibiotics in ancient times